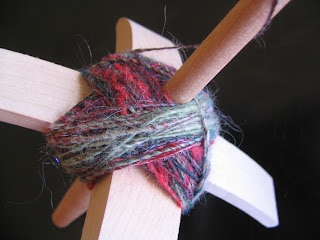 I was going to start with a *Brief History* of spinning, but then it occurred to me that someone has probably already gone there. I did a little searching and found this really well done article that I thought I'd share with you. It begins, "It is generally agreed that the spinning of fibres to form a thread or yarn has been in existence for over 10,000 years. The drop spindle was the primary spinning tool for almost 9000 years, it was used to spin all the threads for clothing and fabrics from Egyptian mummy wrappings to tapestries, ropes and sails for ships." It continues on and is very interesting. Click on this Brief History link to read the rest.

Recently I was chatting with a fellow Etsy shop owner TeaNoir and she was telling me about the Turkish Drop Spindle she had on order. I got curious and started checking them out. I've been planning to buy a travel spinning wheel, but this is not an inexpensive purchase. I started thinking about the Turkish Spindle as an affordable alternative. I already own a couple drop spindles, but I did like the idea of winding the thread into a center pull ball and then being able to ply from both ends. Intriguing.

After drooling over the expensive, beautiful ones, I settled on a more basic Ashford model. After all, what if I don't like it? I haven't even finished my first skein yet, but I already feel compelled to give the Turkish Drop Spindle a positive review. "The Ashford Turkish Spindle (the one I bought) weighs approximately 1.9 oz. and has curved arms and a 14.75"

long shaft. Lets you wind your yarn into a ball; when full, just pull out the shaft and separate the arms." The weight felt really nice and the spin felt very balanced and easy. The only thing that slowed me down getting started was the winding process. Like a lot of creative people, I'm very visual. The simplistic picture drawings that they include as instructions left me wanting. I went on line and found a couple reviews with some better pictures, but in the end, I just had to go for it. I think I was over thinking the whole thing anyway. So I cleared my mind and just imagined winding a ball of yarn without all of the wooden sticks poking through. That may sound goofy, but it helped me. I began in a sort of God's Eye weave and then began to make my "X" pattern. Each time I wound a new length, I rotated to the next diagonal making sure to create the same "X" pattern on the bottom. So far, it looks pretty good. You can see in the picture that I'm just starting a new diagonal.

One thing I should mention, more of an observation than a crituque, it has such a long shaft that it feels more comfortable to use standing. It's not that you couldn't sit with it, it's just that you wouldn't spin very long before the almost 15" spindle was touching the floor. For that reason, I'll probably work with a smaller spindle when I'm on a plane, but the Turkish Spindle is definitely going in my suitcase!

I'll leave you with a few more pictures. The fiber I'm using is one of my own designer singles from Wind Rose. It's fun to spin a roving that already has a lot of color and texture to it. I'll spin a couple ounces and then try out plying from the ball I create. I'll have more pictures when I get to that stage. See you Tomorrow! 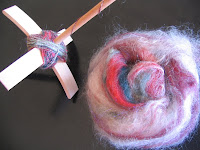 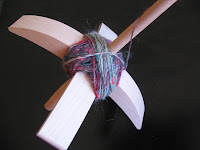 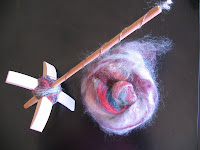 *The Brief History of Spinning was researched by John Bennet and can be found at http://gp.mercuryconnect.com.au/sswdg/Brief%20History%20of%20Spinning.html
Posted by Jenn at 1:06 PM 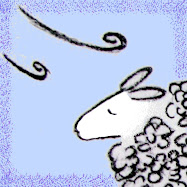 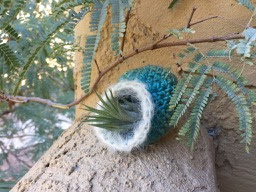